What is Hatch Chile?

Hatch chile is a unique pepper grown in the Hatch Valley of New Mexico. While other people may say they have better chile, there is no chile in the world like that produced in the Hatch Valley. The Hatch valley was once a floodplain for the Rio Grande valley, which is why it has the nutrient-rich soil that makes the most fantastic chile. The temperatures also fluctuate in the Hatch valley, which is another unique growing condition. There is nowhere else in the world with the same growing conditions for delicious chile.

There are also the incredible farmers of the Hatch Valley that make this chile so unique. Most of the farmers of the Hatch valley have been farming green chile for many generations and are descendants of Joseph Franzoy, the first commercial chile farmer. When you grow up in the chile capital of the world, you have a special love for Hatch chile.

The regular season for chile here in the Hatch Valley runs from the first of August through the end of September. However, depending on the weather, we may have chile coming off by mid-July. Some years, we've even harvested into the third week of October due to warm weather. On average, the season comes and goes pretty quickly, though!

According to many accounts, cultivated chile peppers were introduced into what is now the United States by Captain General Juan de Onate, the founder of Santa Fe, in 1609. However, they may have been introduced to the Pueblo Indians of New Mexico by the Antonio Espejo Expedition of 1582 – 1583. According to one of the members of the expedition, Baltasar Obregon, “They have not chile, but the natives were given some seed to plant.” By 1601, Chiles were not on the list on Indian crops, according to colonist Francisco de Valverde, who also complained that mice were a pest that ate chile pods off the plants in the field. After the Spanish began settlement, the cultivation of chile peppers exploded, and soon they were grown all over New Mexico. It is likely that many different varieties were cultivated, including early forms of jalapeños, serranos, anchos, and pasillas. But one variety adapted particularly well to New Mexico was a long green chile that turned red in the fall. Formerly called “Anaheim” because of its transfer to the more settled California around 1900, the New Mexican chiles were cultivated for hundreds of years in the region with such dedication that several distinct varieties developed. These varieties, or “land races” called Chimayo and espanola, had adapted to the particular environment and are still planted today in the same fields they were grown in centuries ago; they constitute a small but distinct part of the tons of pods produced each year in New Mexico. 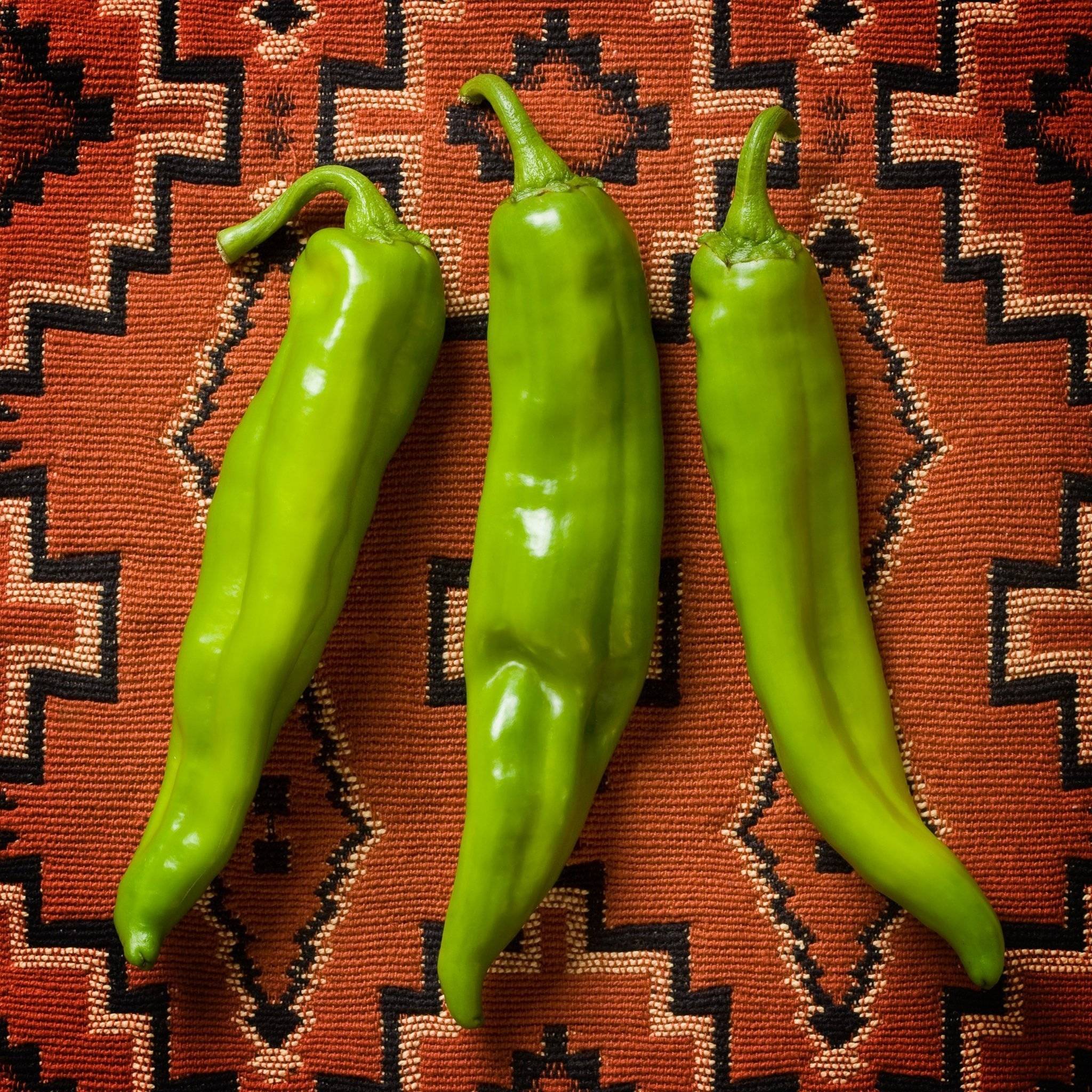 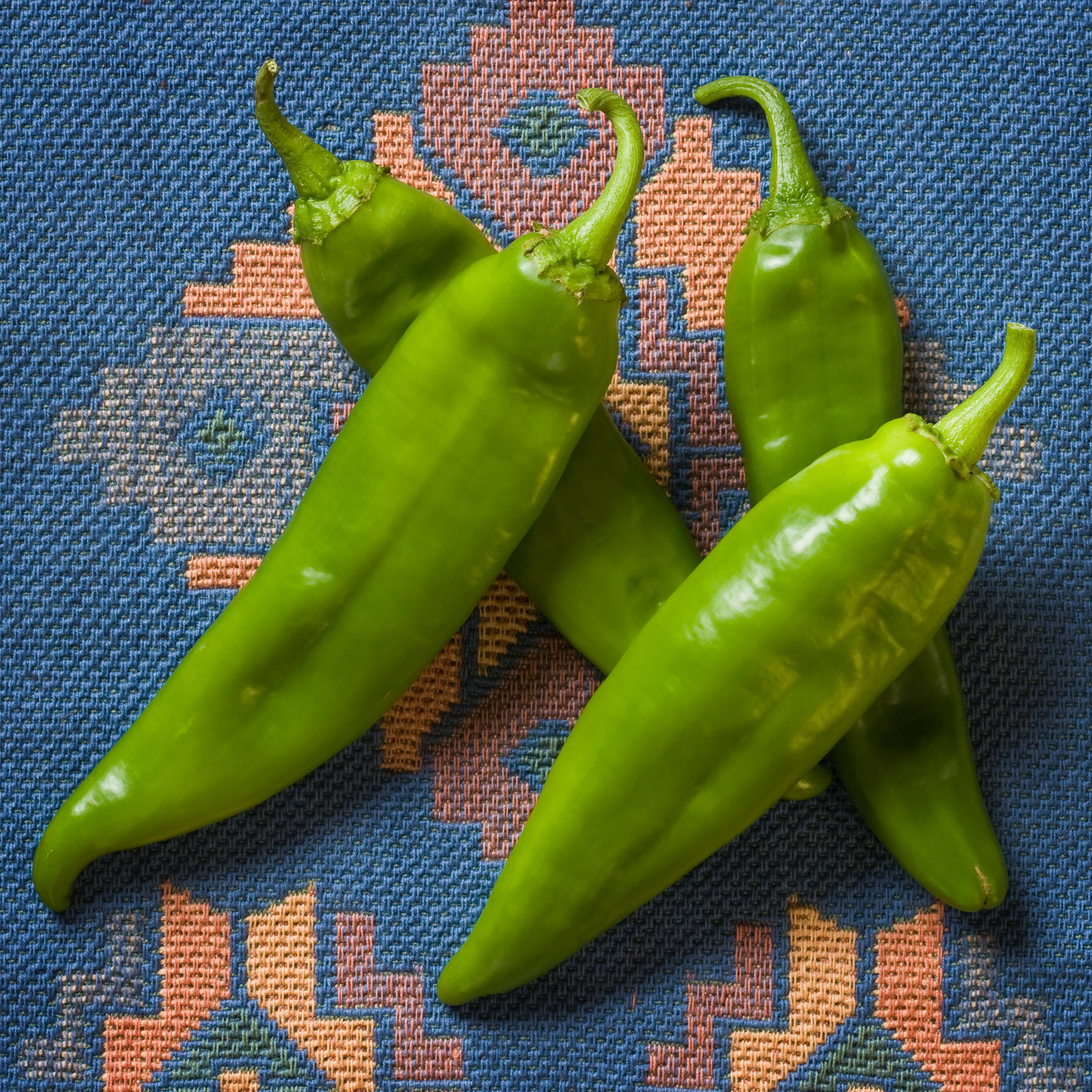 New Mexico chiles are pod types of the annum species. The plant has mostly a compact habit with an intermediate number of stems, and grows between twenty and thirty inches high. The leaves are ovate, medium green, fairly smooth, and about three inches long and two inches wide. The flower corollas are white with no spots. The pods are pendant, elongate, bluntly pointed, and measure between two and twelve inches. They are dark green, maturing to various shades of red. Some ornamentals are yellow or brown. Their heat ranges from quite mild to medium. More than 40,000 acres of New Mexican chiles are under cultivation in New Mexico, California, Arizona, and Texas. Their growing period is about eighty days, and each plant produces between ten and twenty pods, depending on variety and cultural techniques.

Mild ranges in size from 6-9 inches, and is a variety with little to no heat. Our mild is a great starting point for customers who would like to try green chile, but don't like spicy food. It is extremely meaty, and works very well for very mild rellenos.

We grow several varieties for our medium chile including Big Jim and Charger. Both make for great relleno chile as they are large and meaty. These varieties also have inconsistent heat levels from pod to pod and from year to year.

Hot (Sandia or G76) chile tends to be smaller, ranging from 4-8 inches. Typically, this variety is more than hot enough for most chile lovers and has a great blend of flavor and heat. Hot chile is not as thickly meated as Big Jim, it is significantly meatier than Lumbre most of the time.

Our hottest variety, Lumbre, is relatively new to the world of New Mexican chile. It is much hotter than our regular Hot (Sandia) but still has killer flavor. Lumbre is a true scorcher with each pod coming out blistering hot and is the smallest variety we've ever grown. Lumbre sets smaller pods ranging from 3-5 inches. 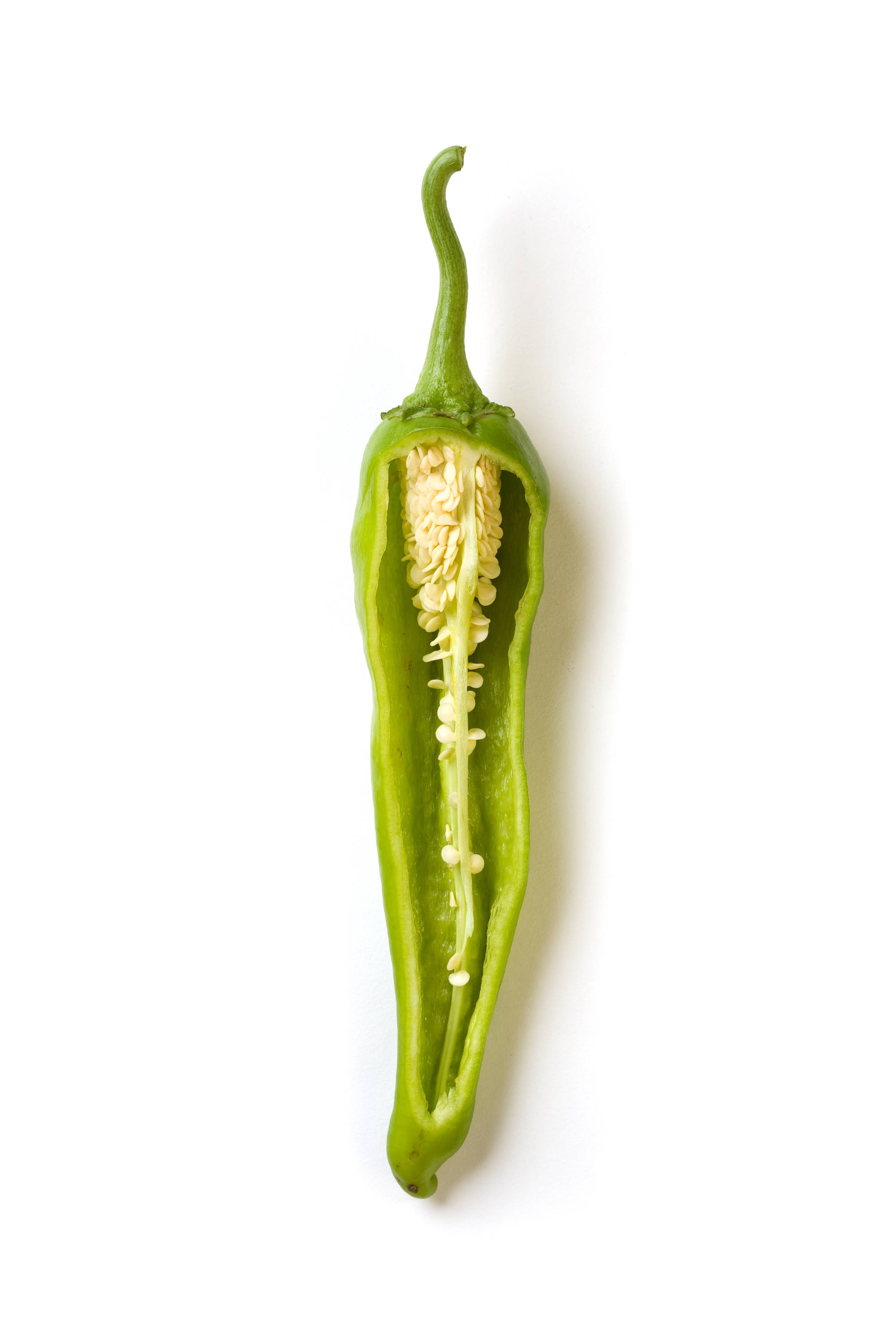 You may have heard that the heat is in the seeds, but this is untrue. The heat in Hatch green chile comes from the capsaicin in the chile, which is in the veins of the chile. When you break open a chile pod, you will see long vein-like strings of meat running lengthwise along the interior of the pod. In mild hatch green chile, these are almost completely white with the occasional hint of yellow coloring. This discoloration is the naturally occurring capsaicin. When you take a step up the heat ladder to medium-hot hatch green chile, you will notice the veins have a more noticeable streak of yellow. This noticeable increase in yellow/orange discoloration of the vein continues on up to X-Hot in which the entire vein is a yellow/orange color. A good rule of thumb is "the darker yellow the vein, the hotter the chile". Although there is still some naturally occurring capsaicin in the flat sections of the chile-pod's meat, the vast majority of it is found in the vein. When green chile is roasted, much of it is spread throughout the pod when cooked, leading to that unmistakable Hatch Green Chile flavor.

For this article check out Green Chile Myth #1 "The Heat is in the Seeds".

After roasting green chile there is a dark colored peeling on the outside of the pepper. The peelings you get from green chile are simply the tough outer layer of the pod or the "skin". They do not have any flavor, and do not provide any protection for the meat inside. When frozen properly, green chile does not lose any of its flavor or heat, and can be peeled before freezing so that when you are ready to make any chile-containing dish you don't have to go through the onerous task of peeling.