Excuse me for a second while I convince myself not to write this entire post in all caps. Instead, I'll give you this: GREEN CHILE PESTO STUFFED CHICKEN IS A TRAIN RIDE TO FLAVOR TOWN.

I don't know if it's just because I'm fairly new to this whole food blogging thing, but these recipes just keep getting better and better. This recipe came to me in a vision. Okay, so not exactly. I wanted to think of a way to combine chicken and green chile that wasn't the ol' standby of chicken, strip of chile and monterey jack cheese (monterey chicken is quite popular 'round these parts). The thing about working with chicken--especially chicken breast--is, you have to bombard it with flavor and loving kindness in every step of the prepping and cooking process. If you neglect the flavor bombarding, you'll end up with dry chicken that tastes a whole lot like, well, chicken.

This is going to be no average piece of chicken as long as you just trust the process. It goes like this: brine, dry, butterfly, stuff, rub, bake. Sound complicated? It's not. I promise. One dark day about 2 years ago, I decided to brine some chicken, and my world has been bright ever since. Really, though. Even if you're just grillin' those babies, it ensures moist chicken every time. At first I thought the brine and the stuffing would be enough flavor, but then I thought the inside of the chicken would be having all the fun and the outside might be a little lifeless. So I decided to make a little paste of spices, and it was the perfect final touch.

Don't be afraid of the lengthy time commitment and ingredient list. The reason it takes 2 hours and 30 minutes is because the chicken needs to sit in the brine for at least 2 hours. You can take care of that step the night before and just leave the chicken and the flavor chattin' in the fridge for that long. Nothin' wrong with that. As for the ingredients, most of them are spices for the brine or the paste! So don't get nervous on me and revert to just salt and peppered chicken for the night. DON'T.

Now, this pesto. It is so simple and absolutely delicious. I wasn't positive that basil and green chile would go together, but I gave it a shot and IT WORKED. Majorly worked. You can taste both the basil and the green chile flavor and there's just a little kick of spice at the end. I used my magic bullet to make the pesto. The important thing to remember is to blend the basil, green chile, salt and garlic first. That way, you can make sure you don't have any garlic chunks running through to surprise an unsuspecting guest. I mean, if that happens, that's okay. Hopefully they don't have a first date later that night. Then I throw in the pine nuts and blend just a little more so that the pesto retains some of its rustic texture.

Usually pesto calls for some sort of cheese as well. If you want some parmigiano in the mix, go ahead! But this pesto is gluten-free, dairy-free and sugar-free, which is a major win in my book! You could also toss some zoodles (like the ones I made last week) with the pesto and pat yourself on the back for a yummy, SUPER healthy and pretty stinkin' gorgeous meal! I might drop out of school, put this pesto in cute little mason jars and travel the country to farmer's markets selling it. It's that good. (But, really, you can sell anything if it's in a mason jar.) This recipe was a surprising SLAM DUNK. I'm definitely making it again. Like next week. Come on over! 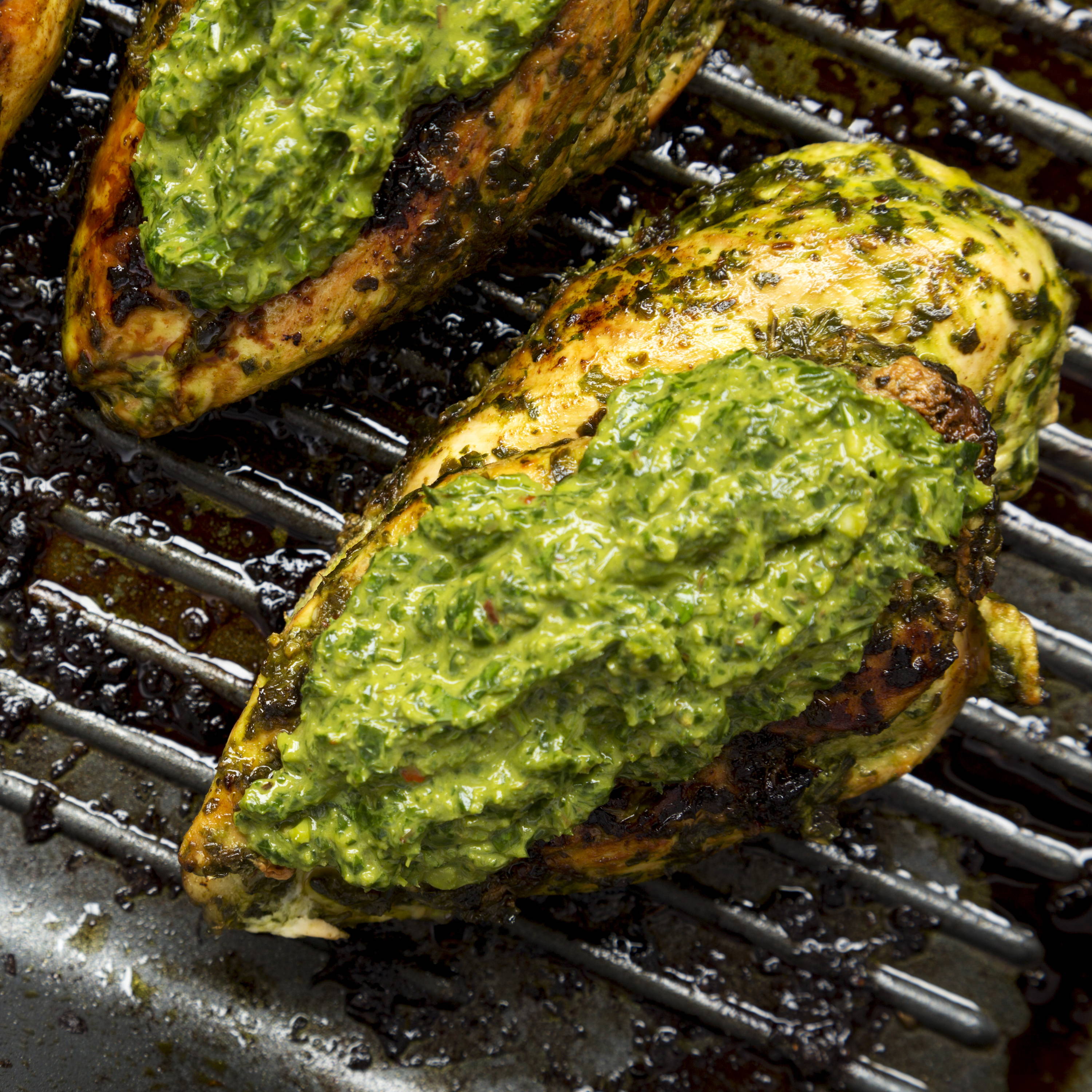 Products Used In This Recipe